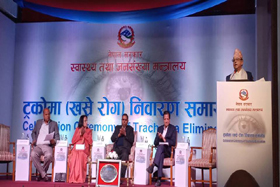 The Ministry of Health and Population said people affected by trachoma received quality eye surgery through a team of 3,000 well-trained staff at 18 eye hospitals throughout the country. Similarly, additional 85 district eye care centres, have been established to provide eye care services.  Ten thousand social volunteers and more than 16,000 female community health volunteers were mobilized to raise awareness of trachoma. The ministry said by the year 2014, 14.7 million doses of Azithromycin, a key medicine to cure the disease, were administered throughout Nepal.

Declaration of trachoma elimination means, the prevelance of active  trachoma is less than five per cent in children between the ages of one and nine years. Similarly, less than 0.2 per cent people above the age of 15 years have a more advanced form of the disease (trachomatous trichiasis) requiring eyelid surgery. Nepal was handed over the trachoma elimination certificate as its health system is capable of identifying and treating any new case of the disease.

The National Trachoma Programme initiated by the Ministry of Health and Population was largely implemented by Nepal Netra Jyoti Sangh and the Department of Water Supply and Sewerage. The programme was financially and technically supported by USAID’s Research Triangle Institute International, International Trachoma Initiative and the WHO. Receiving the certificate at the ceremony, Minister of Health and Population Upendra Yadav said, “This could be an excellent example to achieve this historical success in public health. This also suggests that the public-private partnership model in social sector could be beneficial in other such projects.”

Nepal is the first Country in South East Asia to defeat the world’s leading infectious cause of blindness. WHO officially declared Nepal as a country that has achieved the Elimination of Trachoma as a public health problem. Ministry of Health and WHO handed over the Special Citation to Chairman of Nepal Netra Jyoti Sangh for its leadership and contribution for the elimination of trachoma in Nepal. Also, appreciation certificate was given to major contributors and organizations.