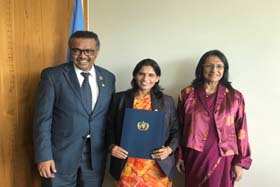 Nepal first country in South-east Asia to eliminate trachoma: WHO

Nepal first country in South-east Asia to eliminate trachoma: WHO

Nepal’s State Minister for Health Padma Kumari Aryal receives a certificate of elimination of trachoma as a public health problem from the World Health Organisation, in Geneva, in May21, 2018. Photo: WHO

When the World Health Organization last month announced that Nepal has become the first country in the South-East Asia region to eliminate trachoma ‘as a public health problem’, many Nepalis, especially those living in central and eastern hills and urban areas, were taken by surprise—apparently because they had never heard about the ailment before.