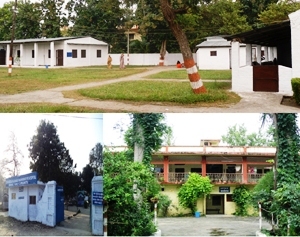 NNJS-Rapti Eye Hospital and NAB-Rehabilitation program were jointly working for the curable and incurable blind in Rapti since 1998 with the support of NABP-Norway. After phase out from Rapti, NAB-Rehabilitation program was started in Bahadurgunj of Kapilbastu District in 2004. The eye care and rehabilitation service for curable and incurable blind was good experience for NNJS and NAB. Hence, NNJS-Rapti Eye Hospital had decided to start a referral eye centre jointly with NAB-Rehabilitation Program in Bahadurgunj Kapilbastu in 1st December 2004. The main objective of the centre was to provide eye service for the curable blind patients. NAB-Rehabilitation program had conducted door to door survey and found near about thirteen thousand curable blind in Kapilbastu. The result of this survey and finding curable blind patients in Kapilbastu encouraged to NNJS-Rapti Eye Hospital to upgrade it into a surgical centre. Previously it was started in a rented house in Krishnanagar and later shifted to a rented building and land in Bahadurgunj as a Surgical Eye Care Centre. Gradually, the number of Nepali patients as well as Indian patients started to increase in the centre. The quality service provided by this centre and satisfaction of patients convinced Ms Narayani Shah, owner of land and building to donate land to upgrade this centre as a full fledge hospital. She donated 1.41 acre land to the centre on 5th September 2012. This centre has been recognized as Chhanda (Kalebabu)-Narayani Eye Hospital, Bahadurgunj from central NNJS as an honor to Ms Narayani Shah. The foundation stone laying ceremony of ward building was held on 15th July 2014. It has one referral centre in Krishnanagar.