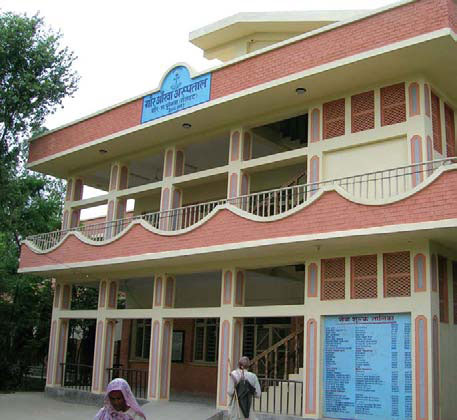 The history of Gaur Eye Hospital began with an eye camp that was conducted in Gaur, the head quarters of Rautahat district in 1990. It was realized that temporary eye camps are not sufficient to cater the needs of the patients in this district. Therefore, a permanent eye health service provider at the locality was felt necessary and Dr. Itaru Kurozumi, the then Chairperson of AOCA, particularly took commendable initiative to establish an eye care center at Gaur. Then a primary eye care center was established in 1997 under the NNJS management with the support of Narayani Eye Care Project (NECP). But due to the increased patient flow, it was realized that a bigger eye hospital was the need and with an aim to provide a wide range of eye care service, the center was later converted into a 16 bedded eye hospital and then to 100 bedded hospital.

Gaur Eye Hospital was established in December 1997. It is located in Gaur Municipality ward no. 12 at Purenwa, the southern part of Rautahat district. It is nearly 3 km far from the Gaur market and 4 km from the Indian border (Bargenia of Bihar). It has a land areaof 2 bigha 1 Katta and 11.5 dhur which was donated by the then government of Nepal with the initiation and support of the then Social Welfare Minister honorable late Mr. Sekh Idrish. It was supported by Association for Ophthalmic Cooperation to Asia (AOCA), Japan and 24 hour television Japan under Narayani Eye Care Project. Dr. Kurozumi and Dr. Junsuke Akura were the distinguished kind personalities from the donor agencies who helped during the juncture. 24 hour television Japan phased out its support from August 2006 and AOCA from March 2010.However, the supporting donor agencies still have a feeling of patronage for the hospital. The hospital is managed and run under Nepal Netra Jyoti Sangh. Now, the hospital is running with its own resources, i.e. from the service fee collected by the patients. The hospital serves patients from eastern part of Bara and Rautahat districts and western part of Sarlahi district. It also receives patients from the catchment areas of India like: Sitamadi, shivher, Darbhanga, Dhaka, Motihari, Kushinagar, Gopalganj, Baliya and some other Districts.

With the commencement of its service, the number of eye patient increased as expected, the Hospital extended its service to 36 beds from 16. With the incensement of patient from neighboring country and different part of the country, the Hospital further increased its bed capacity and reached to 100 beds in 2006. Now it is functioning with 125 beds capacity.

The Gaur Eye Hospital is situated at Gaur Municipality ward no 12 with easily accessible for Nepali as well as Indian people. Hospital service area is total area of Rautahat District some villages of Bara and Sarlahi District and seven Districts of Bihar state of India. Population of those seven Districts of Bihar state is approximately 3 million. The hospital can cover 25% population of those two Nepali Districts Bara & Sarlahi.

Present Capacity of the Hospital

In the starting phase there were 16 beds but as increasing patients' follows the numbers of beds were also increased. Now we have 125 beds hospital in full fledge, well equipped and well trained human resources. The existing infrastructure is sufficient to run 125 beds Hospital. Under Gaur Eye Hospital two Eye Care Center are functioning.

To provide preventive and curative eye care services to underprivileged people at cheaper cost, which helps to reduced backlog of preventable blindness. The hospital wants to empower people to their eye health by providing eye care health education in the community.

To reduce the prevalence of blindness below public Health significant 0.20% by the year 2017.  Due some reason if not possible to bring down 0.20%, but definitely 50 0f the blindness due to cataract will be reduced by the end of 3 years.

To reduce the prevalence of blindness.

in the catchments area.

To consolidate the program and focus for the quality improvement

To focus on human resource development

To develop infrastructure as needed.

Provision of paying service after the general OPD timing